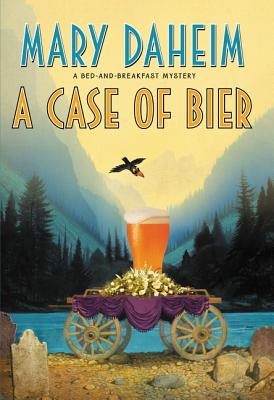 In this charming madcap entry in the New York Times and USA Today bestselling Bed-and-Breakfast series, innkeeper and amateur sleuth Judith McMonigle Flynn’s plans for a relaxing vacation go awry when she realizes her fellow guests have a different kind of getaway planned.

Vacations can be murder. No one knows that better than Judith McMonigle Flynn, owner of Seattle’s popular Hillside Manor B&B. After a busy summer, she desperately needs some R&R. Leave it to her thoughtful husband, Joe, to surprise her with a trip to the Canadian Rockies. Thrilled to be getting away, Judith’s overjoyed when Cousin Renie and Bill agree to join them. Though the husbands have made the arrangements, how bad can a short time away in the beautiful mountains be? Judith and Renie are about to find out!

While the accommodations certainly leave something to be desired, the other guests are the real prize. They’ve gathered on the mountainside to give a relative a proper and permanent send-off—a nice gesture, until Judith realizes that paying their respects might be a little premature . . . without some very sinister assistance. Now, it’s up to her and Renie to save a would-be corpse from an early date with the undertaker.

Mary Richardson Daheim is a Seattle native with a communications degree from the University of Washington. Realizing at an early age that getting published in books with real covers might elude her for years, she worked on daily newspapers and in public relations to help avoid her creditors. She lives in her hometown in a century-old house not unlike Hillside Manor, except for the body count. Daheim is also the author of the Alpine mystery series, the mother of three daughters, and has three grandchildren.