My Life as a Foreign Country: A Memoir (Hardcover) 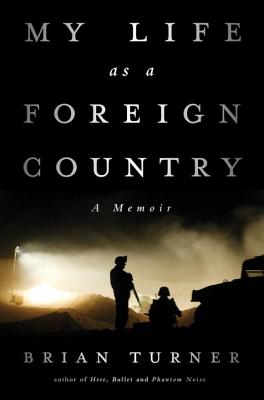 A war memoir of unusual literary beauty and power from the acclaimed poet who wrote the poem “The Hurt Locker.”

In 2003, Sergeant Brian Turner crossed the line of departure with a convoy of soldiers headed into the Iraqi desert.


Now he lies awake each night beside his sleeping wife, imagining himself as a drone aircraft, hovering over the terrains of Bosnia and Vietnam, Iraq and Northern Ireland, the killing fields of Cambodia and the death camps of Europe.

In this breathtaking memoir, award-winning poet Brian Turner retraces his war experience—pre-deployment to combat zone, homecoming to aftermath. Free of self-indulgence or self-glorification, his account combines recollection with the imagination's efforts to make reality comprehensible. Across time, he seeks parallels in the histories of others who have gone to war, especially his taciturn grandfather (World War II), father (Cold War), and uncle (Vietnam). Turner also offers something that is truly rare in a memoir of violent conflict—he sees through the eyes of the enemy, imagining his way into the experience of the "other." Through it all, he paints a devastating portrait of what it means to be a soldier and a human being.

Brian Turner is the author of the memoir My Life as a Foreign Country and the poetry collections Here, Bullet and Phantom Noise. He directs the low-residency MFA at Sierra Nevada College. The Kiss was conceived with his late wife, the acclaimed poet Ilyse Kusnetz, to whom it is dedicated. It was developed from a series he curated for Guernica.

[A] praiseworthy example of how the empathetic imagination can function beautifully in nonfiction writing…. Turner has a talent for amalgamating disparate experiences, especially between civilian and soldier, but also between history and the present…. History can only be served by this kind of attention. Man must look at what he has done. And Turner looks, brilliantly.
— Jen Percy - The New York Times Book Review

Turner is…a poet, and he cannot help but see the world, even the world of combat, in terms of beauty, fragility and heartbreaking splendor…. [His] eloquent rendering illuminates both the shared space and the painful divide between poet and soldier, mission and memory, war and peace.
— Roxana Robinson - Washington Post

Turner is the rare soldier-writer who takes a deep interest in Iraqis—their language and literature, their past, their daily doings, their inner lives.
— George Packer - The New Yorker

My Life as a Foreign Country is brilliant and beautiful. It surely ranks with the best war memoirs I've ever encountered—a humane, heartbreaking, and expertly crafted work of literature.

— Tim O'Brien, author of The Things They Carried

In Brian Turner's extraordinarily capable hands, language is war's undoing, in the sense that his words won't allow absurdity and terror to be anything less than real. My Life as a Foreign Country is lyrical and restless, both ironic and profoundly empathetic.

— Mark Doty, author of Fire to Fire, winner of the National Book Award

Turner's voice is prophetic, an eerie calm in the midst of calamity…Achingly, disturbingly, shockingly beautiful.
— Nick Flynn, author of The Reenactments and The Ticking Is the Bomb

A brilliant fever dream of war's surreality, its lastingness, its place in families and in the fate of nations. Each sentence has been carefully measured, weighed with loss and vitality, the hard-earned language of a survivor who has seen the world destroyed and written it back to life. This is a profound and beautiful work of art.
— Benjamin Busch, author of Dust to Dust

A book…about the haunted past and a haunted man… A story of working through trauma, but above all it's a book about a man, a country, even a species beleaguered by a terrible attachment to war.
— Tomas Hachard - NPR

The psychological consequences of war are movingly portrayed… [a] standout.
— Publishers Weekly