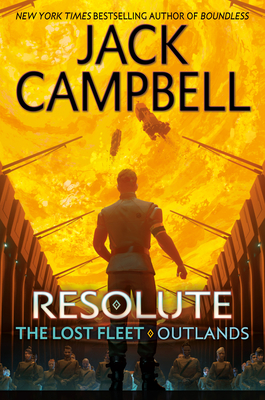 Admiral John “Black Jack” Geary must battle dangers both within and without the Alliance, in this exciting continuation of the New York Times bestselling series.

Geary knows that some political factions in the Alliance were just trying to get rid of him when he was assigned to escort a diplomatic and scientific mission to the far reaches of humanity’s expansion into the galaxy . . . and beyond. But he views his mission as both a duty and an opportunity to make things better wherever he can. And when a crippled Rift Federation ship tumbles out of jump space, Geary leaps into action. But the survivors’ story isn’t completely adding up.

As Geary investigates, he soon finds himself fending off spies and assassins while leading the fleet as it fights its way across space controlled by the mysterious and hostile aliens whom humans call enigmas. Challenges arrive at every turn, including an unknown alien species that invites the fleet to visit one of their star systems. With little information to go on, Geary must weigh the benefits of potential new allies against the possibility of a trap. The fate of the fleet—and perhaps even the future of humanity—will depend on him making the right decision.

If he can stay alive long enough to do that.

Jack Campbell is the pen name of John G. Hemry, a retired naval officer who graduated from the U.S. Naval Academy in Annapolis before serving with the surface fleet and in a variety of other assignments. He is the New York Times bestselling author of the Lost Fleet, the Lost Stars, and the Genesis Fleet series, as well as the Stark’s War, Paul Sinclair, and Pillars of Reality series. He lives with his indomitable wife and three children in Maryland.

“Thirteen volumes in, the Lost Fleet series maintains both its ability to put characters through the rigors of military action and to keep its central figure from losing his guileless outlook and unpretentious charm. This is another winner.”—Publishers Weekly


Praise for Jack Campbell and the Lost Fleet series
“An excellent blend of real science and space action. I enjoyed myself thoroughly from first to last page.”—Brandon Sanderson, #1 New York Times bestselling author of The Bands of Mourning


“Campbell’s genius is action in space.”—Tor.com

"Jack Campbell’s Lost Fleet series is a must-read for fans of military scifi. Packed with complex characters and even more complex deep-space naval battles, it's the ultimate saga of human perseverance and the will to survive."—Zac Topping, author of Wake of War