A Curious Man: The Strange and Brilliant Life of Robert "Believe It or Not!" Ripley (Paperback) 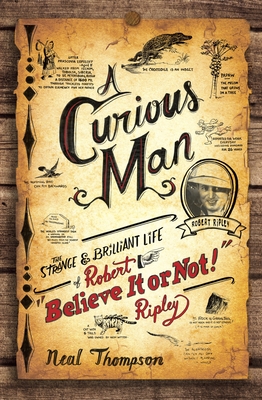 A Curious Man is the marvelously compelling biography of Robert “Believe It or Not” Ripley, the enigmatic cartoonist turned globetrotting millionaire who won international fame by celebrating the world's strangest oddities, and whose outrageous showmanship taught us to believe in the unbelievable.

As portrayed by acclaimed biographer Neal Thompson, Ripley’s life is the stuff of a classic American fairy tale. Buck-toothed and cursed by shyness, Ripley turned his sense of being an outsider into an appreciation for the strangeness of the world. After selling his first cartoon to Time magazine at age eighteen, more cartooning triumphs followed, but it was his “Believe It or Not” conceit and the wildly popular radio shows it birthed that would make him one of the most successful entertainment figures of his time and spur him to search the globe’s farthest corners for bizarre facts, exotic human curiosities, and shocking phenomena.

Ripley delighted in making outrageous declarations that somehow always turned out to be true—such as that Charles Lindbergh was only the sixty-seventh man to fly across the Atlantic or that “The Star Spangled Banner” was not the national anthem. Assisted by an exotic harem of female admirers and by ex-banker Norbert Pearlroth, a devoted researcher who spoke eleven languages, Ripley simultaneously embodied the spirit of Peter Pan, the fearlessness of Marco Polo and the marketing savvy of P. T. Barnum.

In a very real sense, Ripley sought to remake the world’s aesthetic. He demanded respect for those who were labeled “eccentrics” or “freaks”—whether it be E. L. Blystone, who wrote 1,615 alphabet letters on a grain of rice, or the man who could swallow his own nose.

By the 1930s Ripley possessed a vast fortune, a private yacht, and a twenty-eight room mansion stocked with such “oddities” as shrunken heads and medieval torture devices, and his pioneering firsts in print, radio, and television were tapping into something deep in the American consciousness—a taste for the titillating and exotic, and a fascination with the fastest, biggest, dumbest and most weird. Today, that legacy continues and can be seen in reality TV, YouTube, America’s Funniest Home Videos, Jackass, MythBusters and a host of other pop-culture phenomena.

In the end Robert L. Ripley changed everything. The supreme irony of his life, which was dedicated to exalting the strange and unusual, is that he may have been the most amazing oddity of all.

NEAL THOMPSON is the critically acclaimed author of Light This Candle, Driving with the Devil, and Hurricane Season and has contributed to such publications as Outside, Esquire, and Sports Illustrated. He lives in Seattle with his wife and two sons.  You can find him at www.nealthompson.com.

“Deliriously entertaining…In Thompson’s vivid rendering, LeRoy Robert Ripley (1890-1949) leads a life best described as Horatio-Alger-as-directed-by-Preston-Sturges-at-his-madcap-best…At the peak of his popularity, ‘Believe It Or Not’ had more than 80 million readers and received around two million fan letters a month.  Meanwhile, Ripley’s personal life was as overstuffed as his professional one, as he compulsively collected objects, pets, and mistresses to fill his grand 28-room mansion…Reading A Curious Man, it’s easy to see the hunger into which Ripley tapped still raging…his comics feel akin to one’s inaugural adventures into YouTube, particularly in its early days.  The novelty or even extremity is not the true appeal—instead, it’s the experience.  Random discovery.  Each link leading to other links, creating a simulacrum of worlds both remarkably similar and different from our own.”
--Megan Abbott, Los Angeles Review of Books

“The life story of Robert ‘Believe It or Not!’ Ripley is as intriguing as the many oddities in which he delighted.”
--Entertainment Weekly

“An engaging, fast-moving biography…makes the case that Ripley was among the first media celebrities, and that his affection for the grotesque and the extreme shaped American pop culture.”
--Columbus Dispatch

“Robert Ripley was as unique and fascinating as the ‘Believe It or Not’ newspaper feature that made him one of the most popular and widely read syndicated cartoonists in the country during the 1930s, and Thompson delivers an equally fascinating biography that captures the influence of Ripley’s work life then and now, well into the age of television and the Internet ….Thompson superbly shows how Ripley’s work is the basis for today's more extreme reality shows by teaching readers ‘to gape with respect at the weirdness of man and nature.’”
--Publishers Weekly

“Thompson paints a picture of Ripley as a brilliant but aggressively eccentric man, a globe-trotting curiosity seeker who always believed there was something even more unusual just around the corner. A Curious Man is a fine introduction to a man who, for most of us, has been merely the name above a famous title.”
--Booklist

“Robert Ripley's life is just as weird and riveting as a two-headed snake or an 8,000 rubber band ball. And Neal Thompson has told the story brilliantly in this book. What's truly unbelievable is that it's taken us so long to get a full-fledged biography of this great American character, a man who tapped into our fascination with bizarre non-fiction and who can rightly claim to be the godfather of Reality TV. It was worth the wait.”
–A.J. Jacobs, New York Times bestselling author of The Know-It-All and The Year of Living Biblically

"A Curious Man is the rollicking, terrific story of one of America’s greatest men…Ripley brought back to an awed nation the richness of an endlessly exotic world, and Neal Thompson tells the story with a perfectly-pitched sense of what makes such a man, and a nation, tick."
--Peter Heller, New York Times bestselling author of The Dog Stars

“The breathtaking life of a quintessential American: a Frankenstein monster stitched together with equal parts genius, bravado, insecurity, and propaganda.  A master of oddities, Ripley himself was the purest form of his own collection and Neal Thompson is his wondrous exhibitor.”
--Brad Meltzer, #1 New York Times bestselling author of The Inner Circle

"Ralph Waldo Emerson once said that the history of a time can be resolved in the biography of a few stout and earnest people.  Robert Ripley was certainly one of those and, in this fascinating account, Neal Thompson rescues for us a colorful slice of history."
–Colum McCann, bestselling author of Let the Great World Spin

"Anyone who wants to understand America needs to read this book…Neal Thompson gives us a vivid portrait of this complex, restless man in all his maniacally conflicted glory."
--Ben Fountain, Winner of the Pen/Hemingway Award and author of the National Book Award Finalist Billy Lynn’s Long Halftime Walk

"Intelligent and gripping…Neal Thompson expertly captures the surprisingly complex character of Robert Ripley, and a life nearly too fantastic to be believed."
--Karen Abbott, author of Sin in the Second City and American Rose

“Neal Thompson has written the book many writers dream of — the Great American rags-to-riches story—and done it in an intoxicating way. The story of the man who created ‘Ripley's Believe It Or Not’ is a rip-roaring tale of head-shaking amazement.”
-- Marc J. Seifer, author of Wizard: The Life & Times of Nikola Tesla

“In a way that I’m not sure I was expecting, the book builds real sadness into the considerable momentum of its narrative. Neal Thompson constructs an elegant argument: the world Ripley created is the world in which we now live.”
--David Shields, New York Times bestselling author of The Thing About Life Is that One Day You’ll Be Dead

"A Curious Man is a work of real beauty and fun and emotion -- and intense readability. It is a single-session book, one of those that takes your clock and renders it mute until the book has had its say. Thompson is the genuine article: smart and witty, empathetic and a pleasure to read."
--Darin Strauss, bestselling author of Half a Life and Chang and Eng

“For the first time anywhere, Neal Thompson brings us Ripley in all his gaudy glory, crafting a hardboiled Horatio Alger story for a media-obsessed age."
-Tom Reiss, New York Times bestselling author of The Black Count and The Orientalist

“Like Robert Ripley, Neal Thompson has a nose for the strange and wonderful.  A Curious Man is a rich, compelling read for fans of the exotic and uncanny.”
--Stewart O'Nan, bestselling author of The Odds

"A biography of a man who was as unusual as the items he collected…An outstanding work…I couldn't pull myself away."
--Frank Brady, bestselling author of Endgame: Bobby Fischer’s Remarkable Rise and Fall – from America’s Brightest Prodigy to the Edge of Madness

“Ripley's life turns out to have been as weird as his facts. A fun but also compelling read that lingers in an unexpected way.”
--John Jeremiah Sullivan, author of Pulphead

"Believe it! Neal Thompson has written the definitive biography of the larger-than-life Robert L. Ripley, the father of our minutiae-mad modern society."
--Ken Jennings, all-time Jeopardy! champ and bestselling author of Maphead and Because I Said So