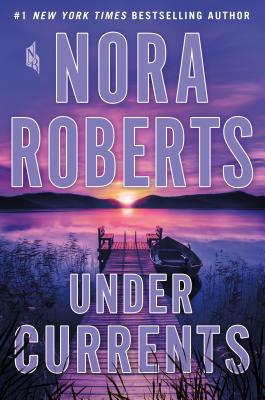 “I know Nora Roberts is a prolific author with many titles under her belt, but every time I pick up a new one it’s pure magic, and Under Currents was no different. I love how Nora didn’t pull her punches during the hard moments and tough times, but the novel was still beautifully balanced with the sweet romance that developed. Without a doubt, Under Currents is a new Nora Roberts favorite. Whether they are old fans or new, I hope romance readers (and others!) will give this book a try. They won’t be disappointed.”
— Kimberly Huynh, Blue Bunny Books and Toys, Dedham, MA

From the #1 New York Times bestselling author, a novel about the power of family to harm--and to heal.

Within the walls of a tasteful, perfectly kept house in North Carolina's Blue Ridge Mountains, young Zane Bigelow feels like a prisoner of war. Strangers--and even Zane's own aunt across the lake--see his parents as a successful surgeon and his stylish wife, making appearances at their children's ballet recitals and baseball games. Zane and his sister know the truth: There is something terribly wrong.

As his father's violent, controlling rages--and his mother's complicity--become more and more oppressive, Zane counts the years, months, days until he can escape. He looks out for little Britt, warning her Be smart. Be careful. In fear for his very life, he plays along with the insidious lie that everything is fine, while scribbling his real thoughts in a secret journal he must carefully hide away.

When one brutal, shattering night finally reveals cracks in the fa ade, Zane begins to understand that some people are willing to face the truth, even when it hurts. As he grows into manhood and builds a new kind of family, he will find that while the darkness of his past may always shadow him, it will also show him what is necessary for good to triumph--and give him strength to draw on when he once again must stand up and defend himself and the ones he loves...

NORA ROBERTS is the #1 New York Times bestselling author of more than 200 novels, including Year One, Shelter in Place, Come Sundown, The Obsession, and many more. She is also the author of the bestselling In Death series written under the pen name J.D. Robb. There are more than 500 million copies of her books in print.