Much Ado About Nothing (Folger Shakespeare Library) (Paperback) 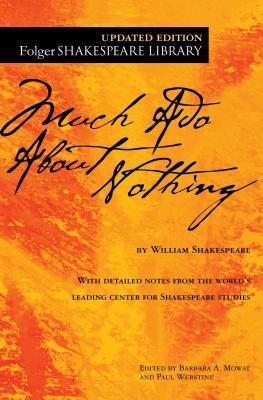 The authoritative edition of Much Ado About Nothing from The Folger Shakespeare Library, the trusted and widely used Shakespeare series for students and general readers.

One of Shakespeare’s most frequently performed comedies, Much Ado About Nothing includes two quite different stories of romantic love. Hero and Claudio fall in love almost at first sight, but an outsider, Don John, strikes out at their happiness. Beatrice and Benedick are kept apart by pride and mutual antagonism until others decide to play Cupid.

The Folger Library is the nation’s best, most navigable and most respected resource for Shakespeare scholarship and teaching. The authoritative edition of Much Ado About Nothing features the side-by-side format favored by both students and teachers, as well as guides to the play’s most famous lines and Shakespearean phrases and language.

This edition includes:
-The exact text of the printed book for easy cross-reference -Hundreds of hypertext links for instant navigation -Freshly edited text based on the best early printed version of the play -Full explanatory notes conveniently linked to the text of the play -Scene-by-scene plot summaries -A key to the play’s famous lines and phrases -An introduction to reading Shakespeare’s language -An essay by a leading Shakespeare scholar providing a modern perspective on the play -Fresh images from the Folger Shakespeare Library’s vast holdings of rare books -An annotated guide to further reading Essay by Gail Kern Paster The Folger Shakespeare Library in Washington, DC, is home to the world’s largest collection of Shakespeare’s printed works, and a magnet for Shakespeare scholars from around the globe. In addition to exhibitions open to the public throughout the year, the Folger offers a full calendar of performances and programs. For more information, visit Folger.edu.