Paterno Legacy: Enduring Lessons from the Life and Death of My Father (Paperback) 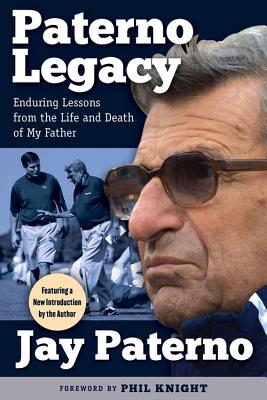 A memorial to one of the greatest coaches in college football history written by the man who knew him better than anyone: his oldest son and coaching protégé

This biography of Joe Paterno by his son Jay is an honest and touching look at the life and legacy of a beloved coaching legend. Jay Paterno paints a full picture of his father’s life and career as well as documenting that almost none of the horrific crimes that came to light in 2012 took place at Penn State. Jay Paterno clear-headedly confronts the events that happened with cool facts and with passion, demonstrating that this was just one more case of an innocent man convicted by the media for a crime in which he had no part. Noting that the scandal itself was but a short moment in Joe Paterno’s life and legacy, the book focuses on Paterno’s greatness as a father and grandfather, his actions as a miraculous coach to his players, and his skillful dealings with his assistant coaches. Available in paperback for the first time, this updated edition provides readers Jay Paterno's perspective on the latest developments at Penn State.

Jay Paterno is the son of Joe Paterno and was on Penn State’s coaching staff for 17 seasons, 12 of which he served as the quarterback coach. He is a writer whose work has appeared in numerous publications, including the Centre Daily Times, the Penn Stater, and USA Today. His columns for StateCollege.com have been cited by Sports Illustrated and ESPN. He lives in State College, Pennsylvania. Phil Knight is the cofounder and chairman of Nike, Inc. and one of America’s most well-known entrepreneurs in the sporting world. Nike is the official athletic supplier of Penn State football’s jerseys and shoes. He lives in Beaverton, Oregon.