Our Mark on This Land: A Guide to the Legacy of the Civilian Conservation Corps in America's Parks (Paperback) 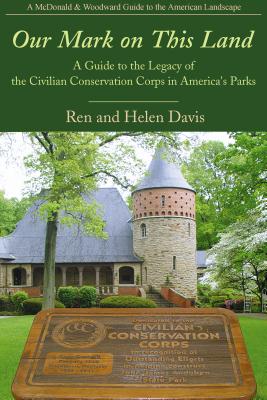 The Civilian Conservation Corps (CCC) was established in March, 1933, as one of the first initiatives of Franklin D. Roosevelt's administration. The purpose of the CCC was to put unemployed young men to work performing conservation and related activities amidst the depths of the Great Depression while simultaneously striving to restore the bodies, minds, and spirits of the men themselves. With unprecedented cooperation among federal agencies, this hugely successful effort became the largest peacetime mobilization in our nation's history.

Over the nine years that the CCC was in existence, more than three million CCC enrollees worked in more than 700 local, state, and national parks and planted billions of trees, erected hundreds of fire towers, restored worn out forests and farm lands, constructed lakes and dams, blazed thousands of miles of trails, and built rustic cabins, lodges, shelters, and other structures. The CCC effort has been described as the most effective, large-scale environmental protection and restoration program ever undertaken in the US, and the rich legacy of this effort is nowhere more visible than in the nation's parks. The work of the CCC placed a distinct and lasting imprint on the nation's parks, a personality of landscape that generations have since come to recognize and appreciate as an inherent part of their outdoor experience.

Our Mark on This Land celebrates the works and other lasting influences of the CCC. Section One provides a short but substantive history of the CCC context within which to more fully understand and appreciate the reasons for, and the enduring works and consequences of, the CCC effort. Section Two, the major part of the book, identifies, describes, and provides access information to more than 300 of those parks that provide the best remaining examples of CCC workmanship. These parks are divided into two groups Destination Parks, those that offer substantial and outstanding examples of the CCC work, and Other CCC-Related Parks, those that contain tangible and enduring results of the CCC effort. Numerous maps and photographs, both black-and-white and color, add additional dimensions and details to the information presented in Section Two. Section Three provides sources of additional information related to the theme of the book.