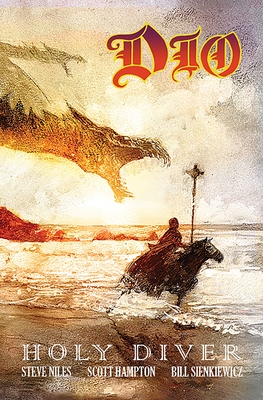 Behold: the Holy Diver graphic novel – an original storyline inspired by one of heavy metal’s most iconic album covers. Penned by acclaimed horror comics writer Steve Niles (30 Days of Night), the book will tell the tale behind the events leading to the powerful moment captured on the cover of Dio's debut album—definitively addressing 30 years of fan speculation. Why is the priest being thrown into the ocean? Who is truly the villain in this scenario?

Steve Niles is a writer, best known for works such as 30 Days of Night, October Faction, Criminal Macabre, Simon Dark, Frankenstein Alive! Alive! and Batman: Gotham County Line.?The success of 30 Days of Night sparked renewed interest in the horror genre; Steve's comic was released as a major motion picture in 2007. His ongoing IDW series, The October Faction, was made into a Netlix TV show. Steve was raised in the Washington, D.C. suburbs, developing his interests in music, writing, and making amateur films. He worked in several comic book stores and played in the bands Gray Matter and Three during the heyday of the Washington DC punk scene, both of which released albums on Dischord Records label.  Steve resides outside Los Angeles with his wife, Monica, four dogs, three cats and Gil the tortoise.

Scott Hampton is an American comic book artist known for his painted work.  Scott's work on Silverheels from Pacific Comics in 1983 is regarded as the first continuing painted comic of US origin.  His work includes illustrations for Batman, Sandman, Black Widow, Hellraiser, and Star Trek, as well as Magic: The Gathering cards.  Hampton has recently completed his work on American Gods for Dark Horse. He lives in Durham, North Carolina.