Collapse: The Fall of the Soviet Union (Hardcover) 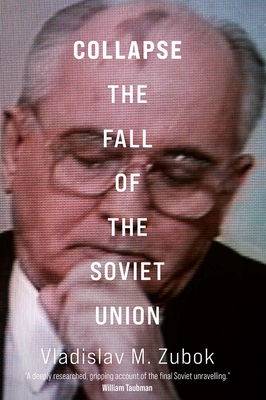 In 1945 the Soviet Union controlled half of Europe and was a founding member of the United Nations. By 1991, it had an army four million strong with five thousand nuclear-tipped missiles and was the second biggest producer of oil in the world. But soon afterward the union sank into an economic crisis and was torn apart by nationalist separatism. Its collapse was one of the seismic shifts of the twentieth century.

Thirty years on, Vladislav Zubok offers a major reinterpretation of the final years of the USSR, refuting the notion that the breakup of the Soviet order was inevitable. Instead, Zubok reveals how Gorbachev’s misguided reforms, intended to modernize and democratize the Soviet Union, deprived the government of resources and empowered separatism. Collapse sheds new light on Russian democratic populism, the Baltic struggle for independence, the crisis of Soviet finances—and the fragility of authoritarian state power.

Vladislav M. Zubok is professor of international history at the London School of Economics and Political Science. He is the author of A Failed Empire, Zhivago’s Children, and The Idea of Russia.

“An excellent study. . . . There have been several books over the past quarter century that have covered this territory. Zubok’s is the most comprehensive, detailed and original.”—Victor Sebestyen, Sunday Times

“This new take on the unexpected collapse of the Soviet empire, by an eminent Soviet-born historian, zooms in on the economic failings and pressures that drove the collapse. . . . Zubok depicts a fateful coalition of idealists, grifters, and thugs that ended up shaping the disastrous 1990s.”—James Palmer, Foreign Policy

“Thoroughly and deeply researched and emotionally engaging for the reader, it is difficult to envisage how there could be a better book on the subject.”—Geoffrey Roberts, Irish Times

“[A] remarkably reliable narrative, effectively covering two years, 1990 and 1991. [Zubok’s] exactitude punctures many a myth, especially on the economy, as he sifts an immense body of research to discover, among other things, that egregious financial mismanagement, not excessive defence outlays, proved fatal.”—Stephen Kotkin, Times Literary Supplement

“No book will likely be produced soon that matches Zubok’s in detail, power, and depth in marshalling the evidence. This book is a central, indispensable work on the end of the USSR.”—Canadian-American Slavic Studies Review

Finalist for the 2022 Cundill History Prize

Winner of the Reginald Zelnik Book Prize, sponsored by ASEEES

“As lucid as it is even-handed, this book will become the new standard for anyone seeking to make sense of the chaos, optimism and foolishness that led to the end of Mikhail Gorbachev’s attempts at reform and the downfall of the Soviet Union.”—Dr. Mark Galeotti, author of A Short History of Russia

“Vladislav Zubok observed the Soviet collapse for himself. He now retells the story with meticulous originality, using much new material, and convincingly deconstructs many simplistic preconceptions of how it all happened.”—Sir Rodric Braithwaite, author of Moscow 1941: A City & Its People at War

“A drama of epic proportions, the Soviet collapse never looked so contingent on human courage and follies, accidents and missed opportunities, as in this book. . . . The best narrative of the Soviet Union’s end we have so far.”—Vladimir Pechatnov, coeditor of The Kremlin Letters

“This is a deeply researched indictment of Mikhail Gorbachev’s timidity and mercurial policies that backfired. Zubok invokes George Kennan’s hope at the dawn of the Cold War that the USSR would experience ‘gradual mellowing.’ Instead, Russia at the turn of the twenty-first century was ripe for the rise of Putin.”—Strobe Talbott, former US Deputy Secretary of State and author of The Great Experiment

“A deeply researched, gripping account of the final Soviet unravelling: Gorbachev’s growing weakness, infighting among his opponents, breakaways to independence by the USSR’s constituent republics, including Russia itself, all in the face of growing reluctance of the Bush administration and the Western alliance to help Gorbachev salvage a democratic union.”—William Taubman, Pulitzer Prize–winning author of Khrushchev: The Man and His Era, and of Gorbachev: His Life and Times