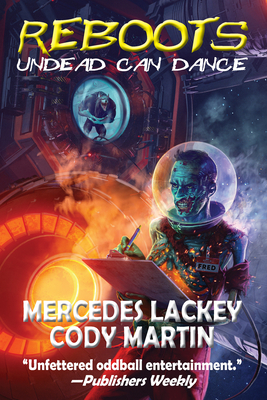 Portions of this book have previously appeared in Reboots and Reboots: Diabolical Streak

Say hello
to Humph the Boggart, the principled, down-on-his-luck private detective,
Skinny Jim the zombie, and Fred the werewolf, in this film noir style space
opera.

Humans
aren't alone anymore--in fact, they share a planet with undead and near-dead
beings, living in...semi-harmony, depending on who you ask This is
the world of Reboots--where zombies, vampires, and werewolves live side-by-side
with humans, taking whatever jobs they can in order to coexist peacefully. So,
what better job to give almost-dead or dead beings, than one that consists of
no air, cosmic radiation, and a lack of life-sustaining essentials? In comes a
cast of interesting, unique, and downright paranormal creatures as they travel
through space. Consisting
of four parts, Reboots: Undead Can Dance is a space opera destined to become a
favorite, written by beloved and world-renowned fantasy author, Mercedes
Lackey, and Cody Martin. Follow
Skinny Jim, a zombie who conceals his ability to speak to avoid being
exterminated after an ill-fated war launched by a zombie emperor, leading to an
alliance between Norms, the Fangs, and the Furs. And then there's Humph the
Boggart, an ethereal parahuman private investigator who navigates interspecies
relationships in claustrophobic extraterrestrial environments with his friends,
including Fred the werewolf. And what
happens when you put them all together in a confined space? Lackey and
Martin have created a perfect, witty, fast-paced read that you won't be able to
put down, and will leave you craving more.