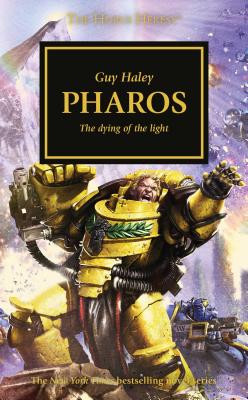 The vicious Night Lords Legion attempt to destroy any hope for the future of humanity.

With the noble Emperor Sanguinius ruling from Macragge, Imperium Secundus stands as a lone beacon of hope even as the Warmaster’s forces continue to ravage the rest of the galaxy. Roboute Guilliman, still Master of Ultramar, has convinced his brother that Terra has fallen and that the mysterious Mount Pharos on Sotha now holds the key to mankind’s future. But the Night Lords, those cruel and pitiless sons of Konrad Curze, have been watching from the shadows, and make ready to launch their long-planned attack on the Pharos itself…

Guy Haley is the author of the Siege of Terra novel The Lost and the Damned, as well as the Horus Heresy novels Titandeath, Wolfsbane and Pharos, and the Primarchs novels Konrad Curze: The Night Haunter, Corax: Lord of Shadows and Perturabo: The Hammer of Olympia. He has also written many Warhammer 40,000 novels, including Belisarius Cawl: The Great Work, Dark Imperium, Dark Imperium: Plague War, The Devastation of Baal, Dante, Darkness in the Blood, Baneblade and Shadowsword. His enthusiasm for all things greenskin has also led him to pen the eponymous Warhammer novel Skarsnik, as well as the End Times novel The Rise of the Horned Rat. He has also written stories set in the Age of Sigmar, included in War Storm, Ghal Maraz and Call of Archaon. He lives in Yorkshire with his wife and son.